To obtain maximum accuracy in gas calculations, particularly in systems where large pressure losses occur, the Joule-Thomson effect needs to be included in the solution. The J-T effect describes the increase or decrease in temperature of a real gas (as opposed to an ideal gas) or liquid as it flows from an area of high pressure to an area of low pressure without heat transfer to or from the fluid and no external mechanical work extracted from the fluid. An example of such a scenario would be a gas flowing through a perfectly thermally insulated throttling device such as a valve, nozzle or orifice plate.

The temperature change arising from a reduction in pressure at constant enthalpy in the Joule-Thomson process can be expressed as: 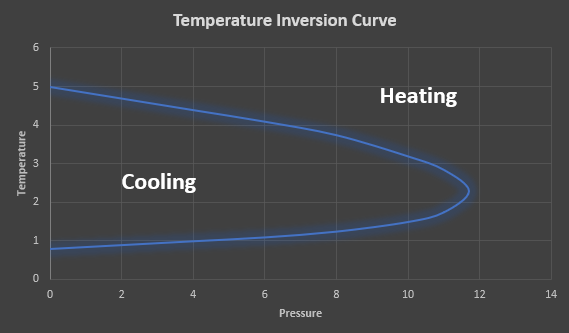 In gas expansion, the gas pressure reduces and thus the sign of ∂P is always negative. The following table explains when the Joule-Thomson effect heats or cools a real gas.

It is worth noting at this point that, there is no Joule-Thomson effect for an ideal gas. The value of μJT, therefore, equals zero, i.e., in theory, ideal gases neither heat or cool during expansion at constant enthalpy.